We end our adventure in the contest Euroscola 2015 under the slogan "Our world. Our dignity today, April 15th, . Our future". During this time we have learned to know many aspects of solidarity, both those concepts we already knew and have refreshed in different activities like the most practical, having been a whole life experience for each and every one of us. Through web Euroscola we had access to many contents then put into practice test online.


We have compiled the later field work http://euroenglishthader.blogspot.com.es/ blog, where you can view an actual sample of the many experiences that some solidarity with others we have experienced in recent months . So we decided that our motto is: Live the solidarity act! For us the work has been developed mainly in those indicated above for the finals dates as our school year runs from March 27 to April 14, so planning most of the activities performed to earlier dates.


All our activities are vertebrated in three areas: our school, our town and the virtual world. The ideas that emerged from the beginning we were many, but as some of them were succeeding in relation to others beyond our control (such as the Medieval Market in Orihuela, talks about volunteering ...), activities we realized that we wanted to act, get down to work to feel and to publicize the concept of solidarity with others, especially the poorest, which we believe can change the world and make it a little better. Hence our motto, mantra that helped us to know that what we did was okay emerged.


First, we were interested to work in our school solidarity, and the main activity has been to give out to our colleagues what is solidarity, how you can participate in it, and obviously that first step up, sometimes so difficult.

On Wednesday February 5  IES THADER  students and participants in Euroscola attended a briefing to better understand what the Fair Trade. This has been one of the activities that made us really think about what happens around us, even that we can contribute to each of us. 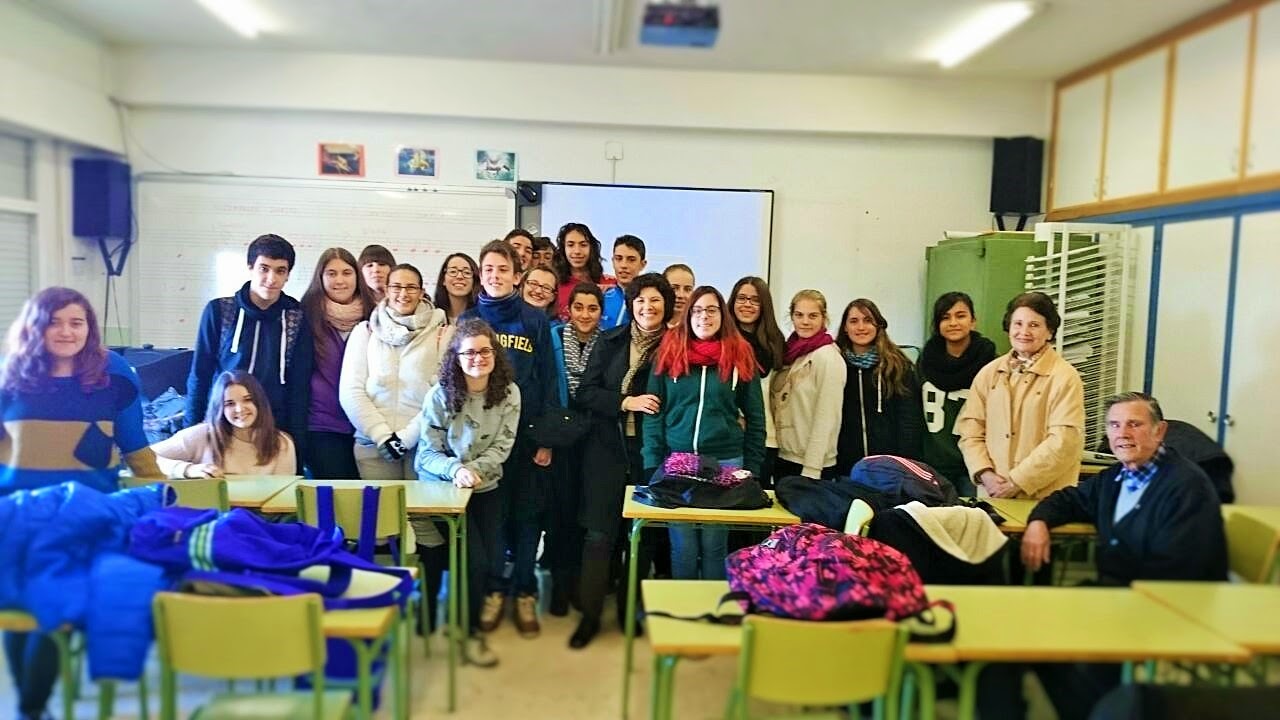 Fair Trade is an organized social movement whose stated goal is to help producers in developing countries achieve better trading conditions and to promote sustainability. Members of the movement advocate the payment of higher prices to exporters, as well as higher social and environmental standards.

First of all, we decided to put a stand in our high school, for a week. We raised €325. 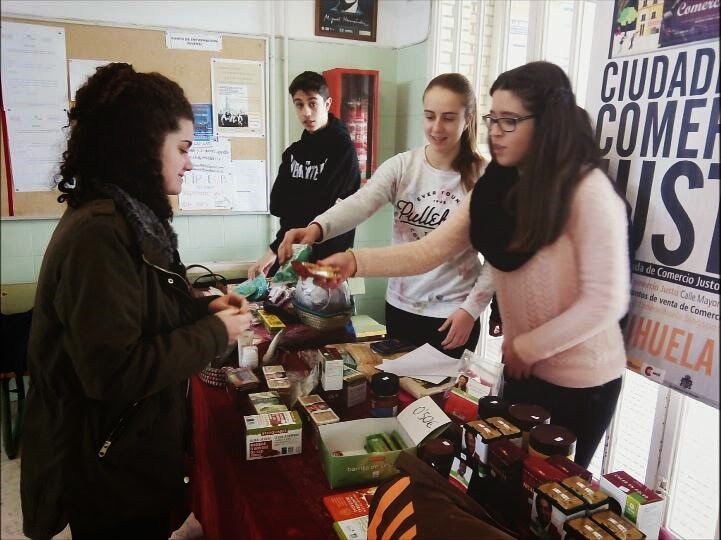 During the first week in march, we also put a box at the entrance of our school. We intended to get clothes and food for needy people. Our colleagues helped bringing us many things. We left the box for two or three weeks and we had a good result. There weren't many volunteers but thanks to those who helped. You have shown us that there is still humanity in the world.


Once we started working on our center, we were interested in how this solidarity is lived in our city. Thus, as a first step we wanted to know what people in our town on what is solidarity thought, so we rushed to the streets to know their opinion and learn a little  more about  popular wisdom.

During the winter break, we also went for the first time to a Charity house in our city. We gave food, clothes and some toys for the children. There, they told us what they do.


In the charity house, they assist and give shelter to people who can't afford to live on their own.


They showed us the house, the rooms and the activities that they do to help the people that live there. We had a great experience. Then, we decided to do a campaign in our high school, based on collecting clothes, food and toys. We also took them to the charity house.


We worked with The Fair Trade organisation several times. First, with the colaboration of our teacher, who is an active volunteer of the Fair Trade shop in out town, we went to the San Sebastian local market in our town and spent the morning selling products from the F.T shop. 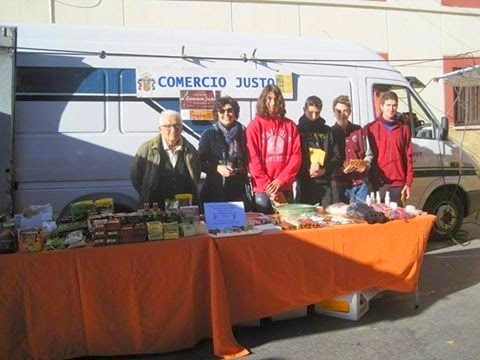 Then, in the medieval market also in our town, on the stand we sold products such as jewellery, food like chocolates, coffee and gifts. While some of us were taking care of the clients and the stand, others went around the streets giving pamphlets and telling people about the Fair Trade. We got a lot of money in the end. 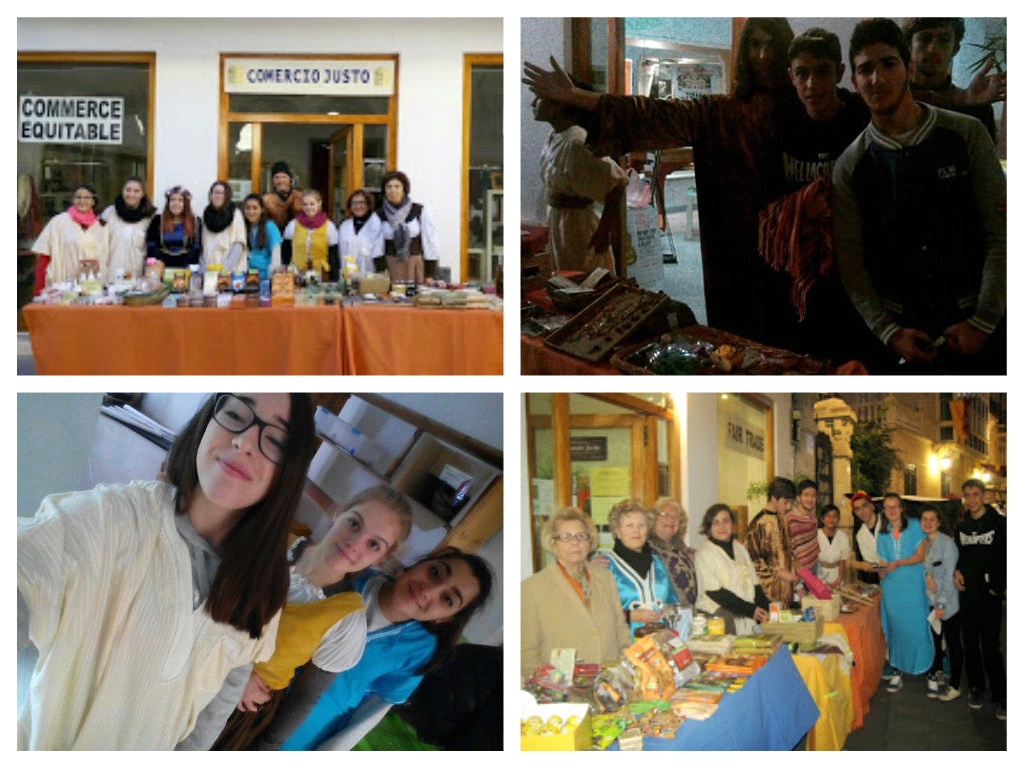 Working with the volunteers and colaborating with the Fair Trade project in our town in general has been great, because it has made us aware of how unfair is the work situation in some countries, and we have learned that it costs nothing to help and make that change.

A windy day we went to the medieval market in our town, with the purpose of helping the Fair Trade organisation to sell their products from poor countries.
Fairtrade is based on a partnership between producers and consumers. When farmers can sell on Fairtrade terms, it provides them with a better deal and improved terms of trade. This allows them the opportunity to improve their lives and plan for their future. Fairtrade offers consumers a powerful way to reduce poverty through their every day shopping. When a product carries the Fairtrade mark it means the producers and traders have met Fairtrade Standarts. 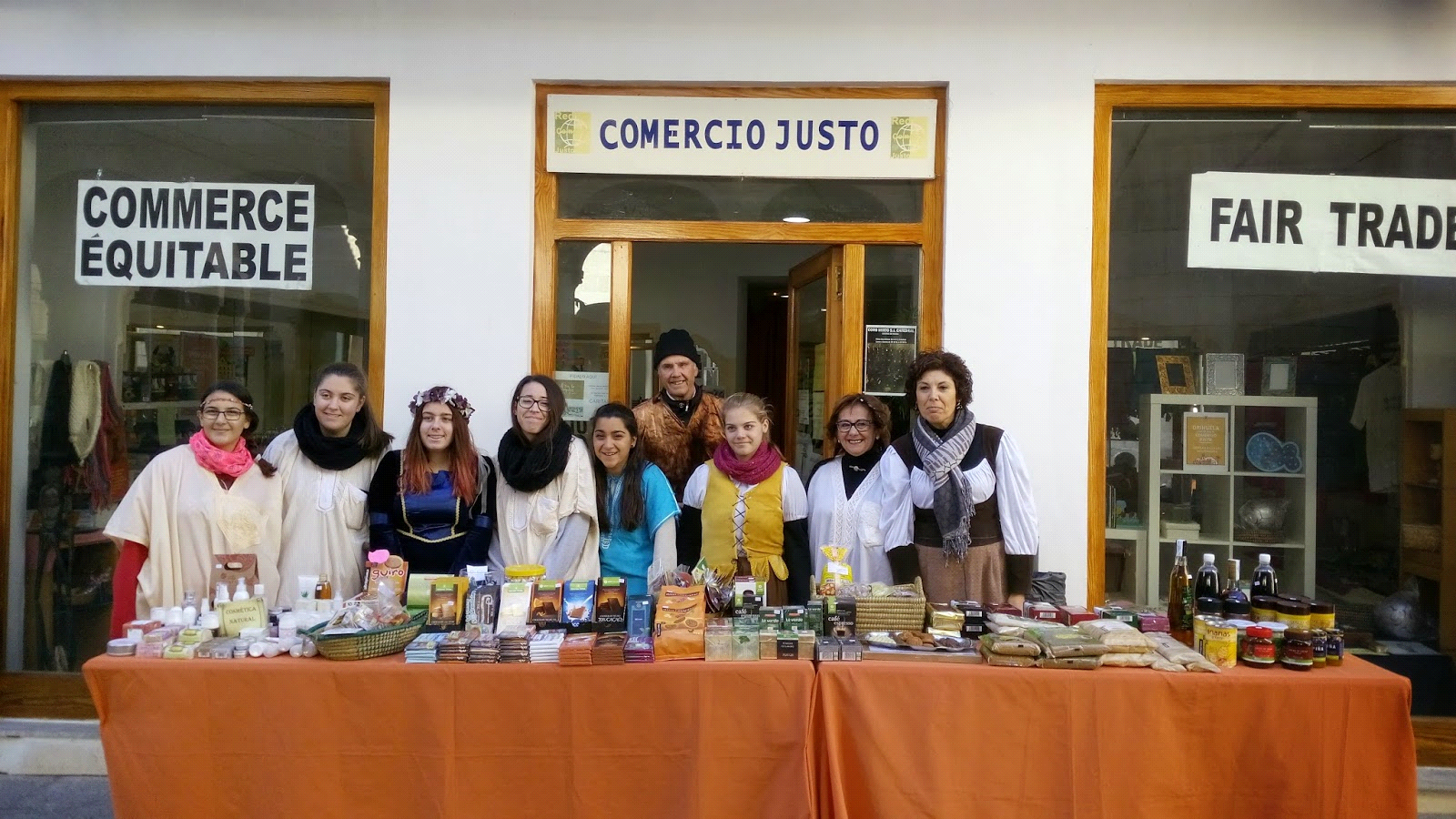 The Fairtrade Standarts are designed to address the imbalance of power in trading relationships, unstable markets and the injustices of conventional trade. This foundation was born in Holland, 1960. In Europe there are 3.000 stores like the one in our town, and 70.000 big supermarkets. Also, we are 50.000 volunteers who are fighting to change the world. In Spain there are 130 stores and 900 supermarkets.

With Fair Trade you have the power to change the world every day.

On February 7th, some students of IES Tháder went to a fundraiser at a supermarket to get funds to fight poverty and hunger in the Third World. To help you don't need more than want to do. Manos Unidas is the Association of the Catholic Church in Spain for aid, promotion and development of the Third World. 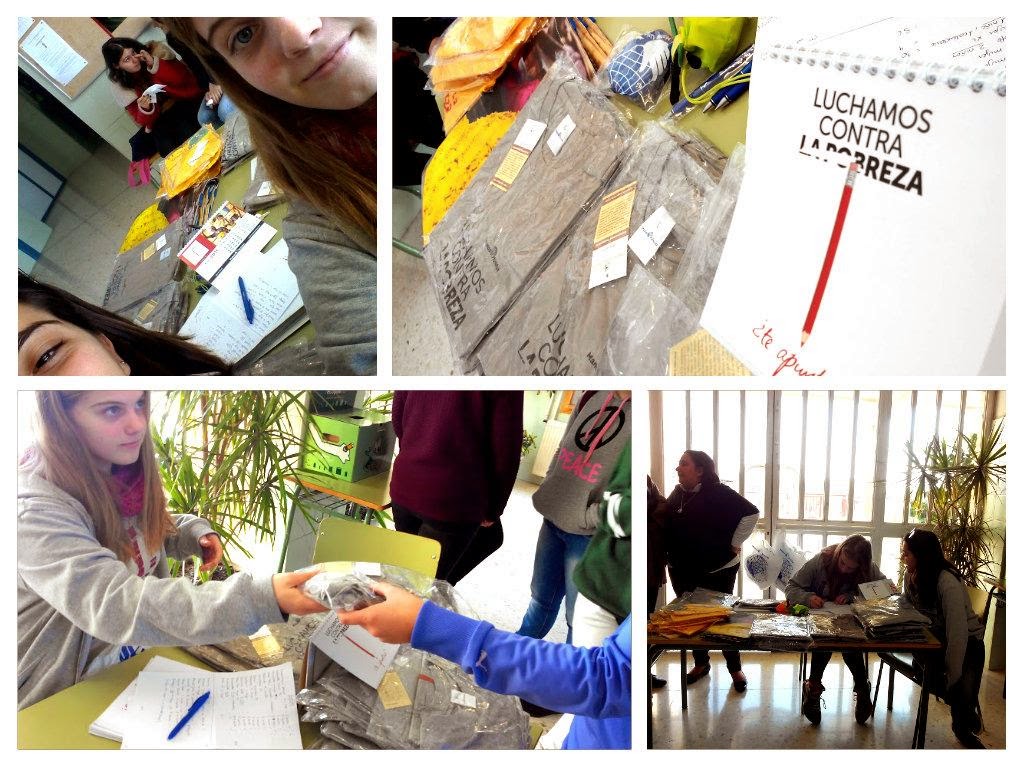 During our Easter holidays, our group decided to help needed people, by giving food to the homeless on the streets. Our aim was, as well as helping people, showing the job that organisations that dedicate themselves to assisting people do. We went around our town giving out food (such as sandwiches, fruit and water) to those begging on the streets. We also donated the food left to "Cáritas", a charity house in our town. Even though the hot weather made it hard to walk around, the smiles on people's faces when we talked and helped them made it worth it.


We also understand solidarity with animals, so one day during our Christmas break, we went to an animal shelter near our town called ‘Asoka’. ‘Asoka’ is an association whose objective is to denounce the abandonment and mistreatment of animals. In this shelter there are dogs, cats, some goats and pigs, and a horse.
Whilst we were there, we visited the facilities, walked the dogs and played with them. We also talked and interviewed some volunteers who work there without receiving any money for the work they do.


Seeing all the dogs behind the bars was heartbreaking. It’s upsetting to think that someone could leave their pet, wheter they love him or not, all alone in the street.

These animals need comfort, a family and a home, and Asoka provides them with what they’re able to give, but in what place better than a home could these animals be?

And we knew we had to give out all our INITIATIVES to others. The boundaries of the planet hardly exist in the virtual world. So, first, we create our blog, a Facebook page, we reactivated Twitter account and we insisted that all our immediate environment and know our project would also disclose to everyone through the web. 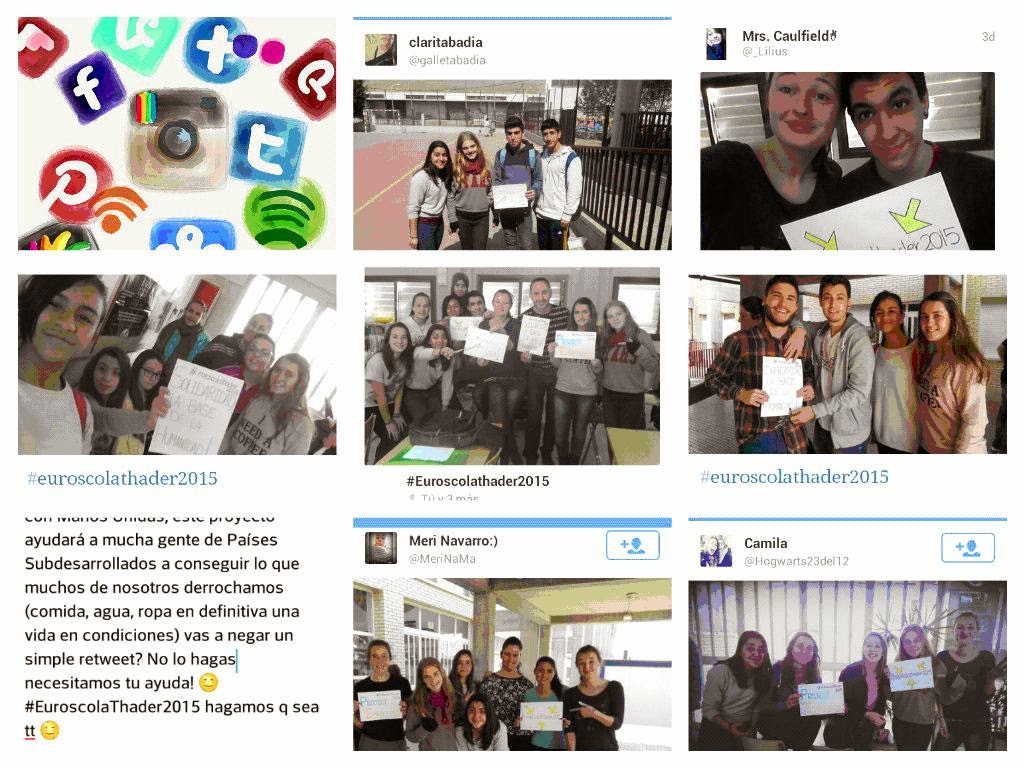 We conducted a series of posters that people were looking to invest a few seconds of their time in reading and think about them. In addition, we found a good opportunity to introduce our twitter hashtag (#euroscolathader2015) and our blog, plus our profiles on other social networks... 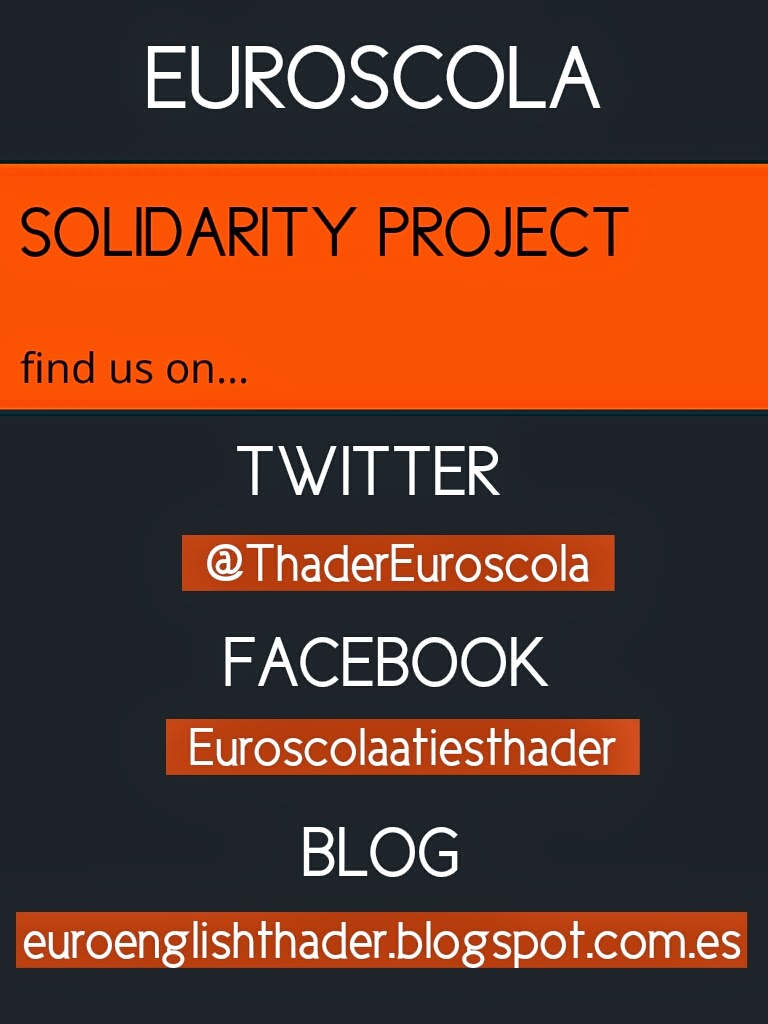 As our school also participates in other European programs such as Comenius, and some of those who have participated in Euroscola also collaborate, on the 12th of March, during the activities organised in the “Instituto Comprensivo A. Malfatti” in Contigliano (Italia) in the project Comenius, (our high school takes part in it) with the motto «Climate Change where I live. Modeling to understand and act. Another life is invented here», a group of students from IES THÁDER presented the activities they have done in the Euroscola competition in front of students from many european countries (Portugal, Romania, Greece, Bulgaria, France, Czech Republic, Eslovakia and Estonia) The exposition was presented in English and French and its aim was to get teachers and students there to know the activities related to charity that are taking place in our high school.. 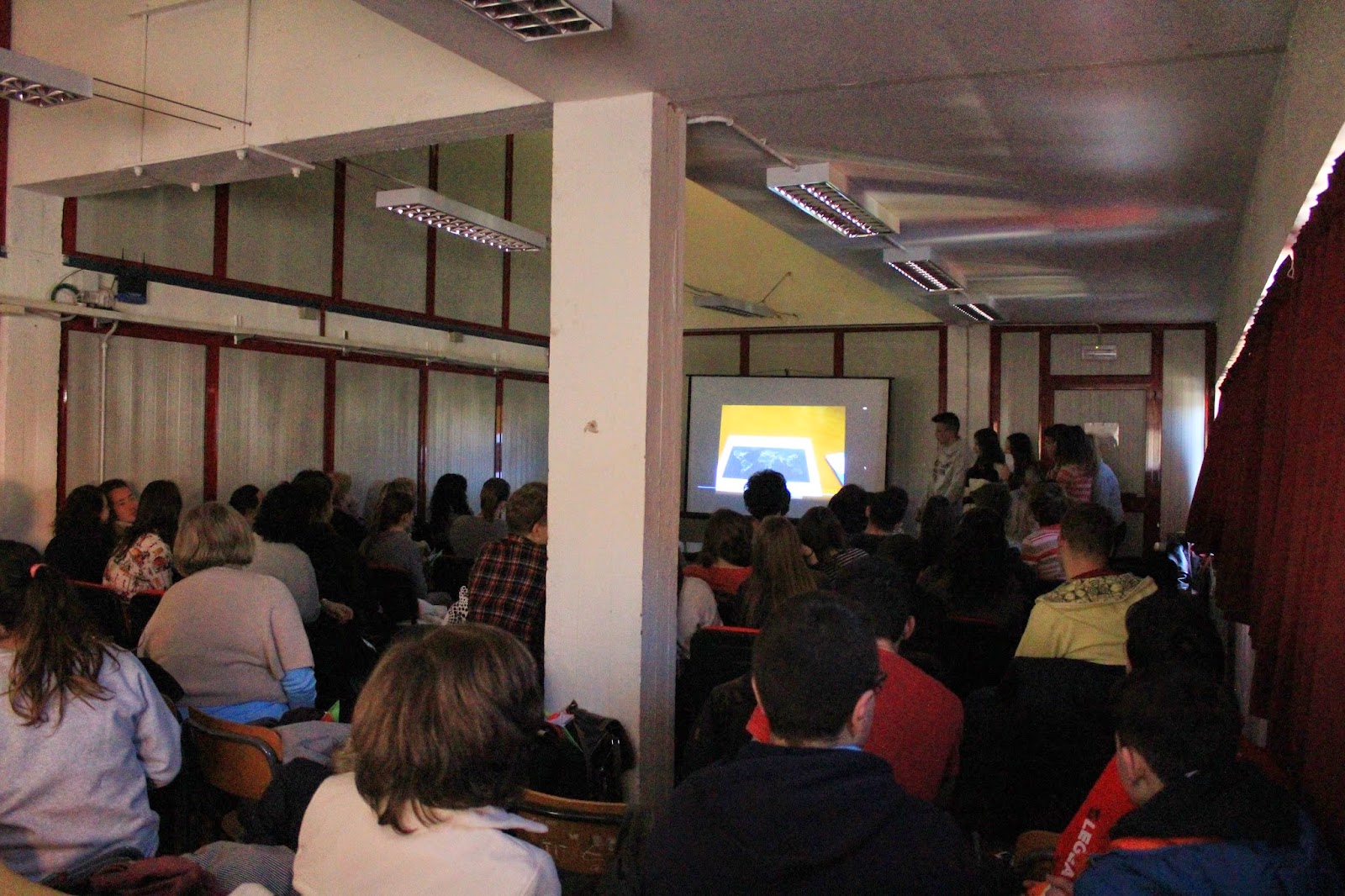 The exhibition was broadcast in English and French and was used by both teachers and students from different schools assistants unaware of the actions related to solidarity that are taking place in the oriolano school.

Taking advantage of the contacts that this and other international projects in which our school participates provided to us, we have promoted our project Eursocola 2015 with many people both Spain and around the world.

In addition, various web media have echoed our activities, as the website of the Generalitat Valenciana, and during these days we appear in local digital media.

We are aware of the role that social media plays in today's society, and that's why we decided to share all of the content of our project on different social networks. 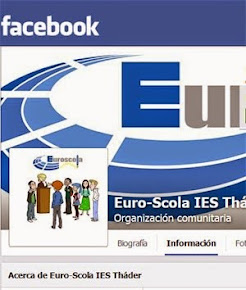